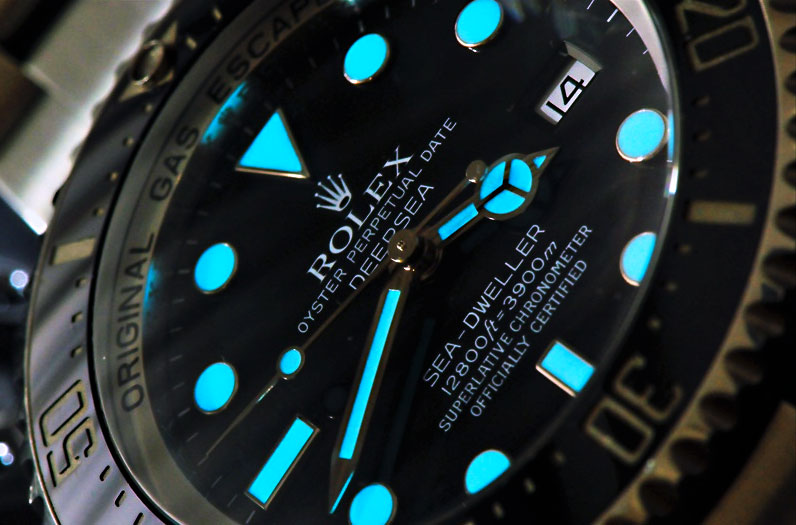 Have you ever encountered these situations? Midway of a movie, you tilt your wrist to take a look at the current time, but are unable to see what time it is. Or, on the way back home, after a late night gathering with your company of old friends, you try to estimate what time you will reach home and take a look at the time but all you see is the dark outline of your watch. If you have encountered these situations before, then you should understand how tricky it is to read the watch in low or no light conditions. Watchmakers have long attempted to introduce innovative ways to improve the watch’s visibility at night, for a myriad of reasons. One of the key ways to do so, is for the watch to adopt a lume mechanism. In this article, we introduce to you, the lume.

The Beginnings of Luminescence

It was said that in the early Sung dynasty, there existed a painting of a phantom cow in a cave that will only appear at night. This means that during the day, you would only see an ordinary painting of a cave. After some thorough investigation, it was found that the ink used for this painting was mixed with the powder ground from a special type of pearl shell, giving it the ability to glow in the dark. In the eighteenth century, bioluminescence was discovered by the scientists from fireflies. As for radioluminescence, it was discovered in the nineteenth century through the study of phosphorescence materials. Finally, in the 1910s, radium was chosen for use in watch dials.

However, in the 1910s, nobody had recognized the harmfulness of radioactivity. As such, radium was used widely for its bright and long-lasting “glow in the dark’ effect. Radium produces luminescence when it decays and ionizing radiation is a product, which excites fluorescent chemicals and causes radioluminescence. As such radium dials did not need to be “charged” in light for it to glow, and would produce lume whenever visibility was low, offering a seemingly perfect solution for watches used in the dark. During the WWI period, many military equipment and watches were made with radium based paint for its effectiveness in the night. Unfortunately, in the following two decades, signs and symptoms of the dangers of radioactivity to human health became apparent.

This brought light to the “Radium Girls”, where many of the girls who worked to apply the radium material to the dials and hands of the watches had contracted a variety of illnesses such as deteriorated jawbones and even cancer. The reason for the radium to have such an impact on them was that they had ingested the radium materials in the process of applying the radium paint to the dials and hands. The ingestion occurred when, it was common practice for them to lick the paint brushes to get the point fine enough to paint the small markers and hands of the dials. In fact, they were even encouraged to lick it, by supervisors who assured them that the only physical side effect would be rosy cheeks. At that time, radium was still being marketed as a medical elixir for all manner of ailments, thus understating the cause for concern for these girls. After these Radium Girls died from radioactivity, it brought about great attention to the deplorable conditions in the US factories, forcing them to tighten up their industry safety standards. The first military watch where radium had been involved was the service pocket watch of the Corps of Engineers (USA) during the WWI. The main contractors for this watch were Vacheron Constantin, Ulysse Nardin and Zenith.

After the use of radium was discredited, tritium and promethium became the next materials to be used in the production of luminous watch dials and hands. A prominent example of promethium used in military watches will be the “Blancpain Tornek” series of the Blancpain Fifty Fathom production, which bears the label “MIL-SPEC1” on the dial. Since the MIL-SPEC materials were considered to be a little dangerous, there was an inscription reading on the cases which said “DANGER. IF FOUND RETURN TO NEAREST MILITARY FACILITY”. However, due to the shorter 2.6 year half-life of promethium compared to the 12.3 year half-life of tritium, promethium was not used widely because its illumination did not last as long as the illumination of tritium materials. Moreover, tritium was believed to pose a very insignificant threat to human health. It was also proved that the low radiation from tritium could not pass through the enclosing watch glass and even if it did, it would not be able to penetrate the human skin.

The Decline of Radioactive Materials, Rise of Super-LumiNova

As the fear of radioactivity grew, fewer people were willing to purchase watches that used radioactivity materials. As a result, it led to the birth of the Super-LumiNova (or strontium aluminate) in 1993 by Nemoto & Co., Ltd. of Japan, which is a safe and non-radioactive material. It starts off much brighter than tritium paints, but will fade off after 1-2 hours. As a phosphorescence pigment, it also requires sufficient activation from sunlight or artificial light before it is able to glow in the dark for hours. This is in contrast to the radioactive materials used in the past which could glow without prior light activation. To overcome this shortfall, many watches these days have increased the font size for numerals on the dials and have enlarged luminescent markers. Furthermore, for Super-LumiNova pigments, the activation and subsequent light emission process can be repeated again and again, and the material does not suffer any practical aging. Most of the non-digital lume watches that you see today utilise this non-toxic, non-radioactive material.

The Future of Lume

Moving forward, several watchmakers have endeavored to revolutionise the lume function by introducing the Gaseous Tritium Light Source (GTLS). This mechanism makes use of tritium vials, where gaseous 3H decays, exciting phosphors lining the tubes, thus producing a soft steady glow. The lume produced by GTLS is weaker than the initial glow from the Super-LumiNova, but is sustained for a much longer period of time, making it more suitable for longer lasting night operations and activities. As the GTLS is a combination of radioactive tritium (in its gaseous form, unlike earlier paints which used compounded solids) and non-radioactive phosphors, it is still radioactive. However, the energy resulting from its decay is very low compared with other radioactive isotopes, as it is less concentrated in its gaseous form. The electrons produced from decay are unable to penetrate the human skin and can be stopped easily by a sheet of paper, making it extremely safe for use in the GTLS. GTLS technology, being a cold light source does not require sunlight or any form of external power source in order to operate. An example of a timepiece using the GTLS is Ball’s Spacemaster Glow.

In this first article from the newest series “Watches 101”, we have gone through some 100 years of history of the lume, a function that is today widely used in many watches. The lume has become one of the most basic functions that is expected of a watch and has made its mark on people of all walks, from the common man on the street, to the military professional in carrying out operations in the dead of night. Instead of frantically chasing and making up for lost time, why not take a step back and take a look at your watch, and marvel at the magic behind how time flies.

My interest in watches was piqued by my grandfather as he would always wind his watch while he shares his stories of the past with me. Since then, I have always wanted to learn more about watches but I initially lacked the discipline to learn on my own. Therefore, I am hoping to find friends with common interest so that we can learn together. Since NUS Horology Club offers me an opportunity to discuss my understanding about watches with friends who are similar in age, ideology and interest, allowing us to learn from one another as well as to learn with one another, I thus decided to joined the club.

I hope that for those like me, lacking the discipline to learn on your own, fearing that it is difficult to understand watches, take the first step towards understanding watches. In fact, with the help of “Watches 101”, understanding watches will not be such a steep step anymore. I believe that after reading all these articles, we will come to appreciate more about time-related mechanisms and even time itself.

As I continue to contribute with my articles, I envision myself learning much more than I had before I joined. I also hope that learning all these will help me in deciding which watches I would want to acquire in the future.

3 thoughts on “Back to Basics: Lume”